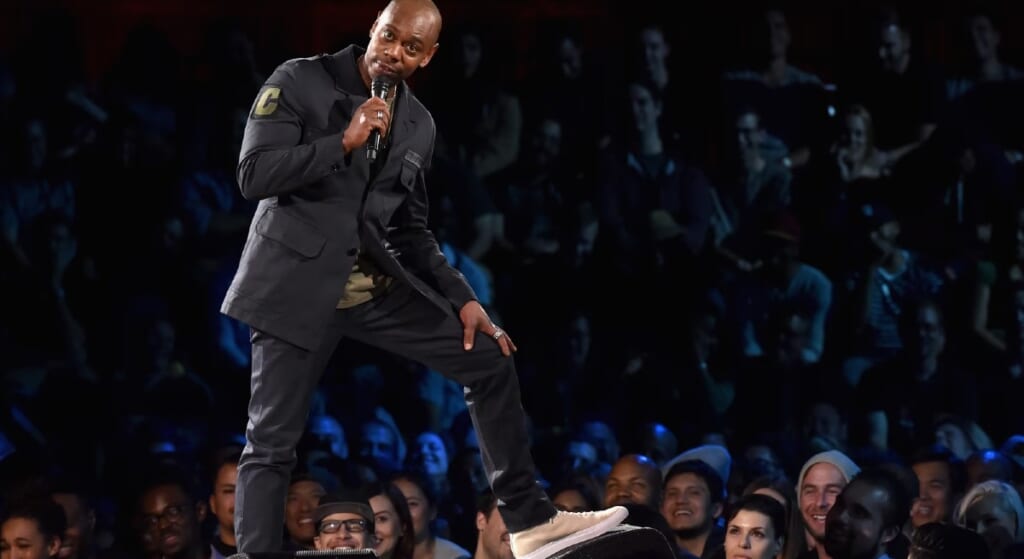 The comedy game has changed over the past two decades, particularly in regards to the treatment of touchy topics. Comedians still seldom escape controversy, but nowadays, the criticisms of a provocative joke come from multiple directions. Negative responses to the controversial content of a comedian’s work are just as likely to come from concerned members of groups that have historically gotten the short of the stick as they are to come from the powerful moral guardians that comedy, especially satire, has historically targeted.

The 2000s were especially a decade dominated by edgy, satirical humor that attempted to push the envelope using politically incorrect terminology, imagery, and contexts. One of the most prominent proponents of this approach to comedy to this day is Dave Chappelle.

RELATED: Motivational Quotes to Help You Rise Above

Unsurprisingly for a comic, especially one that uses satire to discuss some of the most sensitive social issues in the United States, especially race relations, Dave Chappelle has faced a lot of scrutiny. At one point, the American stand-up comedian’s program, Chappelle’s Show, was so popular that one of its sketches was blamed on the theft of a city council candidate’s campaign signs.

Despite having united audiences in poking fun at deserving targets like any other successful satirist, Chappelle has bit more than he could chew on several occasions. His trademark seemingly insensitive way of tackling issues has backfired before, and in recent years, appears to have attracted more vitriol.

“You know, a lot of different feelings come up when they hear that word. But I’m thinking, is it because black people actually identify themselves as the “N” words? No. I don’t know. Maybe. But what if we just used the word for other people, would it be so bad? I don’t know? So, I made a sketch. It’s about a white family, whose last name happens to be [the word], that’s all. Let’s see how offensive the word sounds now.”

One of Dave Chappelle’s long-lasting schticks is using racist stereotypes to mock them, with the intent of subverting audience expectations. As a Black man, he especially attempts to represent a caricature of what it is like to be a Black American through classic switcheroos. This first quote comes from an introduction to one of the most infamous sketches of Chappelle’s Show, which involves a white family whose surname is the n-word but with an “A” instead of an “E.”

The skit was notable for depicting the white family as other completely stereotypical, complete with a comfy suburban home and a black and white filter reminiscent of old sitcoms. The outlier is their casual comfort with their collective moniker, not even questioning the awkward implications of the way it is spelled and pronounced. The segment itself was considerably more provocative than the introductory quote that preceded it, but Chappelle’s inversion of the n-word had other effects in real life.

Mainly, Chappelle noticed that some white fans were getting too comfortable laughing at the race-heavy humor, making Chappelle ponder on whether some of his white fans are laughing with him or at him. The quote on its own is rather inoffensive, but it mirrors the baggage that came with Chappelle’s style, the same baggage that made him prematurely end his own show despite its astounding success.

“I look at like that word, used to be a word of oppression. But that when I say it, it feels more like an act of freedom, for me to be able to say that unapologetically on television.”

Discriminatory terms have a complicated standing in our world. While it is popular for marginalized groups to reclaim slurs and other derogatory terms, other people, including members of said groups, would rather discard them entirely, believing that they are incapable of being separated from the brutality of their history. Out of these two approaches to oppressive language, Chappelle clearly agrees with the former, and has been consistent about it in his career.

From an interview with CBS’ Bob Simon, this particular quote, once again about the n-word, felt liberating in an era of television that heavily focused on challenging the standards imposed by censors on all networks. To Chappelle as an individual, the appropriation of the n-word was intended as a middle finger to the racism it represents, not an endorsement. However, this quote, and Chappelle’s worldview in general, has been criticized as not having aged too well due to potentially leading to a slippery slope that could depict racism, especially anti-Black racism, with no intentions of challenging it.

There were concerns that due to Chappelle’s success, clueless imitators would parrot his jokes and take them at face value rather than have some introspection. In the end, this quote, similar to the one above, is a precursor to what Chappelle would end up feeling of the work that put him on the radar. Michael Richards’ own racist, n-word-filled tirade would prove the critics’ point, much to Chappelle’s discomfort.

“Hollywood is no place for moral absolutism. You know what I mean? We must never forget that R. Kelly peed on a 15-year-old girl. And he also wrote “I Believe I Can Fly. Same guy, same lifetime. If I showed you that video of him peeing on that girl, and scored it to “I Believe I Can Fly,” you’d be torn. ‘♪ I used to think that I could not go on, ♪ You wouldn’t know how to feel, ♪ If I can see it ♪.’ It’s okay, my career ended many years ago.”

#MeToo is arguably the biggest scandal in contemporary Hollywood history, with the legacy of dozens of actors, musicians, and producers, as well as their works in some cases, forever being tainted after their dark sides were exposed. The Bird Revelation, Chappelle’s special from 2017, discussed the overwhelming cycle of powerful people being revealed as sexually predatory. However, while the special bothered some infamous figures such as Harvey Weinstein, this particular quote is about R. Kelly, whose own issues have been common knowledge for over a decade.

Chappelle’s mockery of R. Kelly was well-received, but polarized some fans due to who it focused on. Aside from R. Kelly himself disapproving of Chappelle’s jokes about him, this quote has been characterized as cheapening what R. Kelly did and shifting focus on the wrong target in a special specifically about recent scandals. According to Neal Brennan, even the R. Kelly sketch from Chappelle’s Show has polarized modern audiences for its irreverent treatment of the singer’s actions.

RELATED: Why Dave Chappelle Walked Away From $50 Million Dollars

“Punched the LBGTQ community, right in the AIDS. Can’t do that. Can’t do that. But I do believe and I’ll make this point later that the kid made a very egregious mistake. I will acknowledge that. But you know a lot of the LBGTQ community doesn’t know DaBaby’s history, he’s a wild guy. He once shot a [guy]… and killed him, in Walmart. Oh, this is true, Google it. DaBaby shot and killed a [guy] in Walmart in North Carolina. Nothing bad happened to his career.”

Closer is Dave Chappelle’s most recent special, and arguably his most controversial work, although in a rare case for Chappelle, the emotional reactions to it were not strictly related to the usual racial themes of his work. In an attempt to criticize the double standards of politeness and what is considered acceptable to condemn by society, Chappelle compares how people individualize and defend racial minorities compared to sexual minorities using DaBaby. Just like Chappelle, DaBaby is a famous Black man that has been the subject of controversy. In DaBaby’s case, he came under fire for homophobic comments.

However, as the quote points out, he also got away with shooting and killing other people in public. Chappelle highlights the contradiction by characterizing it as people being too sensitive about words and too desensitized to violence, but several fans did not take them lightly. Among other things, Chappelle’s comments were seen as hypocritical due to their inability to see the parallels between homophobia and transphobia affecting LGBT people and how racism affected Chappelle’s own life as a Black man, a central theme of his comedy.

The quote also faced backlash because of how dismissive Chappelle appears to be about LGBT struggles and how unwilling he was to condemn DaBaby’s reactionary comments beyond calling it a “mistake.” Additionally, while many agree that gay, bisexual, and transgender people are not exempt from partaking in bigotry even with all the discrimination they themselves face, detractors of the joke thought of it as sloppy in execution. To them, the joke is a more bloated version of the self-admitted risks that come with Chappelle’s work, only much easier to misinterpret.

“I’m team TERF. I agree. I agree, man. Gender is a fact. You have to look at it from a woman’s perspective. Look at it like this, Caitlyn Jenner whom I have met, wonderful person. Caitlyn Jenner… was voted, woman of the year. Her first year as a woman. Ain’t that something? Beat every bitch in Detroit. She’s better than all of you. Never even had a period, ain’t that something? [laughter] I’d be mad as shit if I was a woman. I’d be mad if I was me. If I was in the BET awards, sitting there and they’re like “And the winner for [black man] of the year… Eminem.”

This quote is an embodiment of Chappelle’s current position in the entertainment landscape. In the current culture way, Harry Potter creator J.K. Rowling has become one of the most polarizing celebrities for her own comments about gender, womanhood, and trans people, particularly trans women. This led to numerous people, especially Harry Potter fans, feeling betrayed and disappointed.

As her pseudonymously published new novel shows, Rowling stubbornly puts this issue at the center of her public persona. Having always appreciated the idea of free speech and never a stranger to inflammatory content, Chappelle felt compelled to defend Rowling on Closer, attracting both Rowling’s current supports and her critics. Similar to the controversy with Rowling, the above quote left many fans disappointed with Chappelle.

The open affiliation with the term “TERF” (trans-exclusionary radical feminist) despite knowing what the term means and the comparison of trans people to blackface through the Eminem reference were people’s main problem with this particular Dave Chappelle quote. People that disapproved of the jokes lambasted the comments as socially irresponsible and claimed that they fueled even more negative sentiments toward a group that already faces heavy prejudice. This quote is the infamous part of Closer, and will likely define Chappelle’s contemporary career in the next years.

Inspirational Quotes From the Comedy Legend

Chappelle isn’t known only for his incendiary remarks, the comic also aims at improving one’s self, watching for Hollywood pitfalls, and overcoming failures. Perhaps his biggest, most inspirational quotes come from his ability to see ‘magic’ in what he does and how it can bring people together.

“The hardest thing to do is to be true to yourself, especially when everybody is watching.”

“I just always loved stand-up. It’s like magic. You say something, and a whole room full of people laughs together. Say something else, they laugh again. The fact that people come to see that and participate in that… I don’t know, it’s just like magic.”

As these quotes suggest, Chappelle went from being worried about how his edgy comedy would attract the wrong people to intentionally stirring the pot for the sake of it. A quote on success that he once preached indicated that not having “the right people around you” while moving “at a million miles an hour” can make you lose “yourself.”

These modern quotes show an insistence at rushing into an issue without knowing the full context. Chappelle is clearly still able to provoke, but as the responses to his latest special show, some fans believe that he is regressing into a state of being edgy just to be edgy. Chappelle will remain successful, but his audience may likely change.