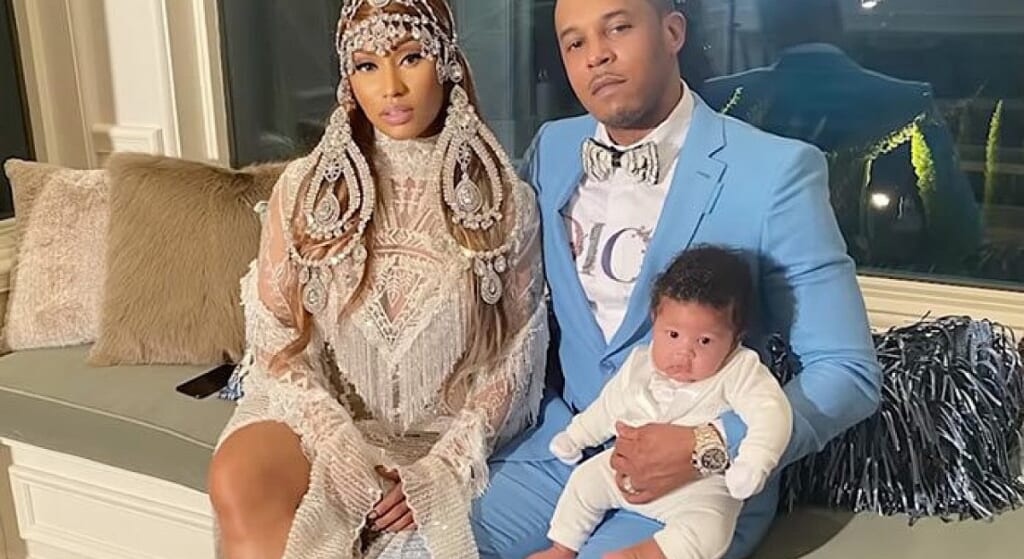 Nicki Minaj always wanted kids. So much so that, back in 2012, she made quite the prediction about becoming a mom. As she told Complex, “In 2022, I’ll definitely be married and I’ll definitely have my two children.” She quickly added, “OK, I might have three, but I do want at least one boy.”

In the years that followed, she shared the same sentiment with numerous outlets, including L’Uomo Vogue. “I don’t want to work my whole life without ever experiencing the joys of a family,” she told the mag in 2014. In order to ensure that wasn’t the case, she planned to focus on her career for four more years, then switch priorities and focus on her personal life.

REVEALED: Who Is Rumi and Why Did Beyoncé and Jay-Z Name Their Daughter After Him?

Similarly, the rapper told Cosmopolitan in 2015, “I just want to be Mommy.” She also shared her desire to be a hands-on mom who was always present to cook for her kids, “take them to school, go to the parent-teacher conference, help them with their homework, and put their work on the refrigerator.”

Turns out, Minaj wasn’t kidding. Following the timeline she’d given L’Uomo Vogue, Minaj tied the knot with Kenneth Petty in October 2019 and revealed on her @nickiminaj Instagram she was pregnant with her first child in July 2020.

Nicki Minaj has made a real point of keeping her son out of the spotlight, but we have learned a few things about him since his birth. For one, we know that the 10-time Grammy nominee was “over the moon” when she found out she was expecting. However, the arrival of her bundle of joy wasn’t a total dream.

RELATED: Nicki Minaj: It Takes Guts to Keep on Going

Sharing her birth experience with fans on Twitter, Minaj revealed she was at home and had just gotten out of the shower when her water broke. Husband Kenneth Petty “was very scared and I was laughing at him,” she wrote. Despite the initial lack of support, they made it to the hospital, and there, Minaj said she “pushed for 2 1/2 hours” before her son was born.

Her motherhood dreams finally came true on September 30, 2020, when she and Petty welcomed a healthy, happy baby boy.

What Is Nicki Minaj’s Son’s Name?

Rather than giving into the temptation of posting her little one all over social media, Nicki Minaj has rarely shared images or videos of her son online. She’s been so secretive, in fact, that she hasn’t even revealed his name. However, she did tell fans his sweet nickname.

Baby Minaj was three months old when he made his IG debut and the rapper shared she’s been calling him Papa Bear. Penning an ode to her son, she wrote, “Papa Bear thank you so very much for choosing me to be your mama.” She also gushed that “becoming a mom is by far the most fulfilling job I’ve ever taken on.”

RELATED: Who Is The Rock’s Daughter Simone – And Why Is She Getting Hate Online?

And while his legal name is still a mystery, we do know the moniker Minaj almost chose. Back in 2021, she teased Queen Radio listeners, asking, “You know what his name was supposed to be?” Saying she “might still change” her son’s name, she revealed, “A lot of people said they liked it, but I said, ‘Nah.’ His name was going to be Ninja [but I] changed it at the last minute.”

What We Know About Papa Bear’s Father

Nicki Minaj’s relationship with Kenneth Petty has stirred up plenty of controversy. The couple first dated when they were teens, then reconnected during Thanksgiving 2018 when Minaj flew to her old stomping ground — Queens, New York — to help hand out turkeys to those in need.

The couple’s connection was instant and days later they went Instagram official. Less than a year later, they were married.

However, rather than focusing on the rapper’s happiness, fans instantly took issue with Petty’s shady past. As TMZ reported, Petty was convicted of attempted rape in 1995 and served four years in prison. He was also ordered to register as a sex offender in the state of New York and folks were quick to criticize the match. Minaj wasn’t fazed and clapped back at the haters, writing, “He was 15, she was 16… in a relationship. But go awf, internet, y’all can’t run my life. Y’all can’t even run y’all own life.”

RELATED: 16 Nicki Minaj Quotes to Remind you of Your True Worth

That wasn’t Petty’s only run-in with the law. The Blast uncovered that he actually served seven years in prison after pleading guilty to manslaughter in March 2006 for shooting a man three times, killing him.

Jump to 2020 and Petty’s legal drama continued. This time, he was charged with failing to register as a sex offender in California (where he had moved with Minaj) and faced 10 years in prison. He was released to await trial but was slapped with a curfew and travel restrictions and actually had to ask a judge for permission to attend his son’s birth.

In the end, TMZ confirmed that Petty had pleaded guilty and was sentenced in July 2022 to one year of home detention and three years of probation, plus a $55,000 fine.

Is Nicki Minaj Expecting Baby No. 2?

Nicki Minaj has given us plenty of empowering quotes about the importance of self-love and knowing your true worth, but since giving birth, she’s also become a source of great motherhood quotes.

For one, she’s repeatedly called the arrival of her son, nicknamed Papa Bear, the “best thing that ever happened to me” and the “the ultimate blessing of the universe”. But he doesn’t just give her endless joy, he also makes her a better human being. As she told James Corden, “I think motherhood has made me see more good in people, see more good in the universe, makes you a little bit more of a forgiving person.”

RELATED: Why Demi Moore’s Relationship With Ashton Kutcher Destroyed Her Bond With Her Daughters

Given how much Minaj enjoys being a mom and the fact that she said she would have liked to have three kids by 2020, fans are vigilantly looking for signs that she’s pregnant with Baby No. 2.

In July 2022, during an Instagram Live, the rapper sent her followers into a frenzy when she mixed up two little words and gave folks the wrong idea. “I’m not fat, guys, I’m pregnant,” she said before catching herself and clarifying, “I think I said it wrong. I meant to say, I’m not pregnant, I’m fat.”

Why Nicki Minaj Is So Secretive About Her Baby Boy

One thing is clear: Nicki Minaj puts her son above all else. She hit pause on her career to focus on motherhood (just like she said she would) and she’s not about to apologize for it. When one fan tweeted in September 2021 that they were sad Minaj hadn’t made a public appearance in over a year, she clapped back, writing, “I have an infant with no nannies during COVID. Who mad? Not risking his health to be seen.”

Minaj, who has been open about not wanting to hire a nanny, is working hard to be the best parent she can be and that includes allowing her son to grow up outside of the limelight and away from public scrutiny.

According to experts, that’s a wonderful approach and something all parents should consider, not just those in Hollywood. Whether you’re an A-lister or not, a child’s privacy is an important thing to consider. Yes, it’s tempting to show them off, but it can have very real, very long-lasting effects on their future.

RELATED: Jamie Lee Curtis Marrying Her Daughter in a Nerdy Wedding Is #ParentGoals – Here’s Why

As Shayne Sherman, CEO of Techloris, told Fatherly, “Technically speaking, every time you upload a photograph on a social media networking site, they own the right to use such images in any way they see fit.” That means “they can sell it to advertisers and make a profit themselves without needing anything from you.”

What’s more, according to a report published by the UK Children’s Commissioner, “information collected about a child today might jeopardize their future, potentially affecting whether they are offered a university place, job or financial products (such as insurance or credit).” It can also expose them to identity theft.

Add the epidemic of online critics and shamers and Nicki Minaj’s (uncommon) decision to stay as private as possible can teach us all an important lesson. Even those without kids.

While the temptation to post every little detail of our lives is greater than ever — “Pics or it didn’t happen” — it’s actually an unhealthy trend that can have dire impacts on privacy, mental health, and our ability to be mindful and live in the present. Yes, Minaj still posts on her social accounts and uses them to connect with fans, but she’s picky about what she shares and keeps most of her family life private. It’s a healthy balance to inspire us all.