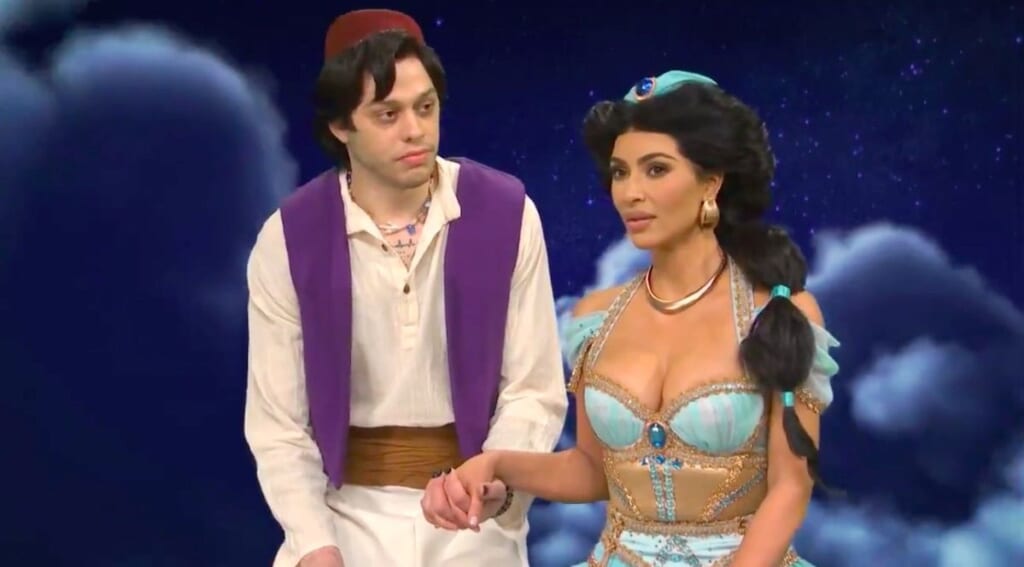 No one saw the relationship between socialite and reality TV star Kim Kardashian and Saturday Night Live’s Pete Davidson coming and yet, nearly a year into it, they have become the most relatable celebrity couple around. It’s clear that they are smitten with one other and the Instagram Stories they post have us thinking Kardashian and Davidson may be the heart of #relationshipgoals and yes, opposites do attract.

RELATED: Why We Need to Talk About the Pete Davidson and Kim Kardashian Dating Rumors

Kardashian and Pete were coming off bad breakups. While the SKIMS founder was dealing with a complicated divorce from ex-husband Kanye West, Davidson wasn’t far removed from his whirlwind courtship and engagement to pop star Ariana Grande. Many people thought this was a rebound relationship, especially for Kardashian.  After all, at 41, she is 13 years older than 28-year-old Davidson and as the mother of four, it’s not hard to see why fans and the public didn’t think it would last.

One point people failed to take into consideration is Davidson seems to be a genuine, laidback, and funny guy; three important traits to any relationship. Coming off the drama with Kanye West, it’s easy to see why Davidson is so appealing to Kardashian. Despite the fact that both are massive stars in their own right, the relationship manages to be pretty relatable to normal couples.

Kim Kardashian and Pete Davidson may be two of the most famous people in pop culture right now, but they met in an entirely relatable way: at work. Kardashian hosted Saturday Night Live for the first time on October 9, 2021, and that’s where they connected. Us Weekly revealed that Davidson was a professional when they rehearsed and didn’t flirt until after the show was finished — with one exception.

RELATED: One Word Kim Kardashian Used To Let Kanye West Know The Marriage Was Over, Here’s Why It Works

During the episode, the pair performed an Aladdin sketch where they kissed. Kim revealed that she felt a “little zing” when they smooched, according to her interview with Amanda Hirsch on the Not Skinny, But Not Fat podcast.

When Davidson didn’t turn up to the SNL after party, Kardashian took it upon herself to text the comedian, and the rest is celeb relationship history.

They Went on a Group Date for Halloween

After Kardashian’s appearance on Saturday Night Live, she and Davidson went out on several dinner dates. Then, on Halloween in 2021, the couple was spotted at California’s Knott’s Scary Farm on a group date with sister Kourtney Kardashian, Travis Barker, and other friends.

RELATED: Why Kim Kardashian’s Redemption Arc Is Surprising, But Powerful

This is totally relatable because once a couple gets a few dates over with and are still interested in each other, it’s normal to introduce your new flame to your friends. At the time Us Weekly reported that Kim was falling for Pete.

She Went to Staten Island to Meet His Family

Davidson grew up on Staten Island, New York, with his parents Amy and Scott Davidson. His father was a New York City firefighter who died in the 9/11 attacks. He was only seven years old at the time and says he was profoundly affected by his father’s death. In an interview with the New York Times, he said it was overwhelming and as a result of the trauma, he acted out in school and ripped all of his hair out until he was bald.

RELATED: 16 Kim Kardashian Quotes to Make You Care Less About What Others Say

In December 2021, Pete took his relatively new girlfriend to Staten Island to meet his mother. Hollywood Life reported that Kardashian and Amy Davidson spent several hours together. Pete is very close to his mom and younger sister Casey and lived with them until he bought his own place in 2019.

The entire time Pete Davidson and Kim Kardashian have been dating she’s dealt with the bizarre behavior of her ex-husband Kanye West. West is reportedly obsessed with the fact that his ex is already dating and Davidson has been the target of the hip-hop star’s anger. In the music video for “Easy,” West buried a Claymation figure of Davidson.

RELATED: In The Midst Of Divorce Allegations, Kim K Surprises The Real People Behind Her Success With $10K Gift

Davidson’s confidence and sense of humor are as relatable as they are attractive, he hasn’t once faltered during the near-constant drama. At one point West publicly called Kim a “bad mother” and Davidson responded with a text to West, “Yo it’s Skete, Can you please take a second and calm down. I t’s 8am and it don’t gotta be like this. Kim is literally the best mother I’ve ever met. What she does for those kids is amazing and you are so f—king lucky that she’s your kids mom. I’ve decided I’m not gonna let you treat us this way anymore and I’m done being quiet. Grow the f—k up.”

Pete Davidson Can’t Wait To Be A Dad

On an upcoming episode of comedian Kevin Hart’s Hart to Hart series, Davidson expressed looking forward to being a father, “My favorite thing ever, which I have yet to achieve, is I want to have a kid. That’s like my dream. “I’m so excited for like, that chapter, so like, that’s kind of what I’m just preparing for now, is trying to be like as good of a dude, and develop, and get better, so when that happens, it’s just easier.”

RELATED: Why We Need to Talk About Kim Kardashian’s Emotional Breakdown Over Her Marriage

Kim has four children with Kanye West, North, Saint, Chicago, and Psalm. In an April 2022 interview on Access Hollywood, Kim hinted that she’d be open to more kids. Specifically, she’d like to have six like her mom, Kris Jenner.

Davidson was spotted with Kardashian’s six-year-old son Saint at The Grove mall in Los Angeles in early June. Neither Kim nor her other three children were there. It appeared Davidson was having a solo bonding session with Saint, holding hands as they shopped and walked into The Cheesecake Factory together. There isn’t any restaurant that is more relatable than The Cheesecake Factory.

Kris Jenner Approves of the Relationship

During an ABC News special primetime interview with her family, Kardashian spoke about her relationship with Davidson and how serious she is about him.

RELATED: How Did Kim Kardashian Avenge Her Father After OJ Simpson Destroyed Her Family

“I am a relationship kind of girl, for sure, and I wouldn’t be with someone if I didn’t plan on spending a lot of my time with them/ Obviously, I want to take my time, but I’m very happy and very content. And it’s such a good feeling just to be at peace.”

Kardashian and Davidson may be traveling in private jets and vacationing in five-star resorts, but when it comes to new love, they are just like us.

In Defense of Kim Kardashian: How She Earned Her Riches and Fame – But Not the Hate