Gay Son Comes Out To Close-Minded Dad, Gets Shocked For All The Right Reasons 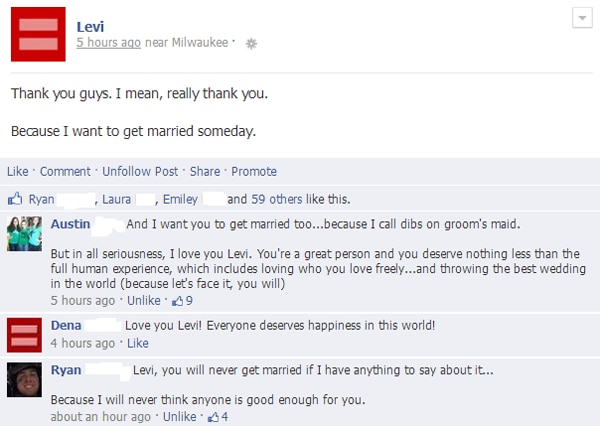 Out in the open

To many of Levi Miles’ friends at the University of Wisconsin, it was an open secret that he was gay. However, he never told the world.

In a piece he penned in the Huff Post, Miles says that the positive response following him officially coming out on Facebook was heartwarming.

However, visiting home, Miles was very concerned with his father’s reaction. While his mother had known Miles’ secret for two years, he wrote that “coming out to my father terrified me beyond all other things,” fearing that he’d disown him.

One day his father left the house, and Miles’s mother told him “Your father saw your Facebook status when I left my Facebook up. The cat’s out of the bag.”

When Miles asked her for his reaction, the response was heartbreaking.

“She said that he wasn’t too happy about it, mostly disappointed and kind of hurt, from what I gathered,” wrote Miles.

“He’d even had the gall to say that if I weren’t in theatrE, I wouldn’t have ended up gay, because it wouldn’t have seemed so normal.”

“My dad has never been open-minded on the topic of homosexuality, and I know that he was praying that I wouldn’t be gay.”

When his dad returned, neither brought up the topic.

Miles admitted that “I didn’t want to talk about my sexuality with my father any more than he wanted to talk about it with me, which was good.”

With the tense weekend over, Miles hugged his parents goodbye as he hopped on the train back to Milwaukee.

A few hours later, his mother texted him.

“Your dad has funny ways of showing he loves you. Look in your backpack.”

Inside, between two notebooks, was a picture of a young Miles and his father, smiling.

On the back was a note that wrote “I will always love you, no matter what.”

As hurtful and ignorant his ‘disappointment’ was to Levi, credit to his father for reflecting and realizing that Levi is his son and ultimately deciding to love him for who he is. While he didn’t do it with some moving speech, he expressed it in his own way —just like his Levi expresses who he is.

Above all, hat’s off to young Levi for sharing this story, and reminding us all that even the seemingly coldest and closed hearts and minds can thaw with love.