Restaurant Owner Catches Robber Red-Handed And Offers Him A Job 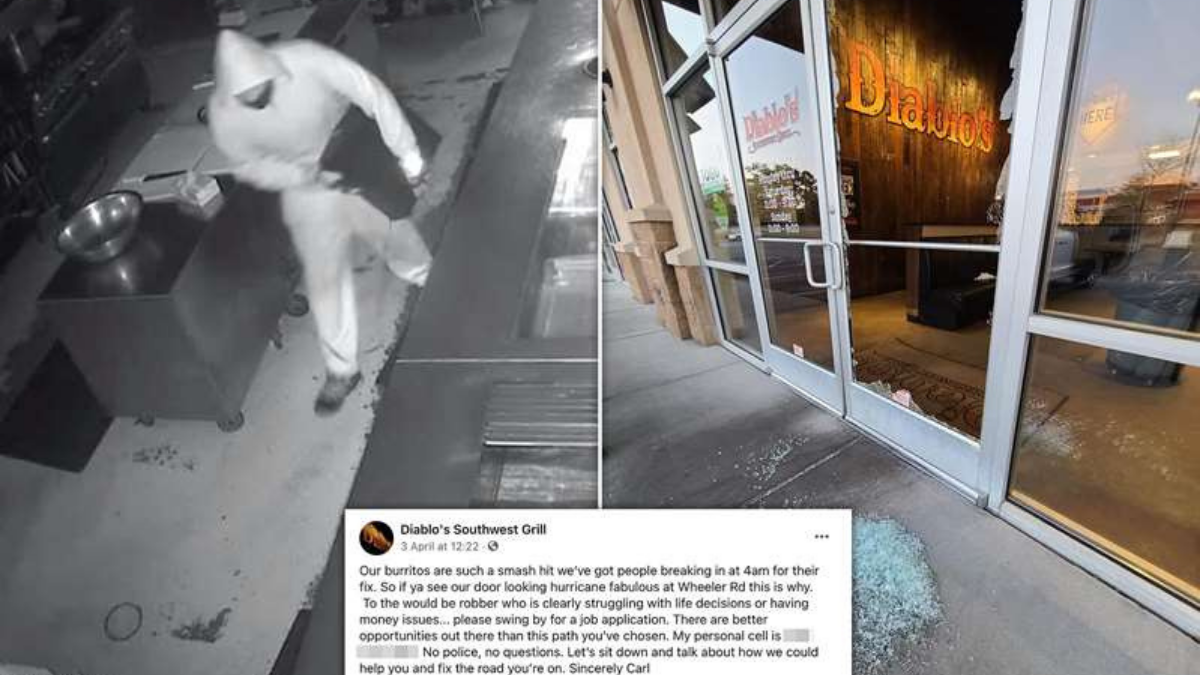 The owner of a restaurant in Georgia decided to practice humility rather than fury at a suspected burglar.

He offered the burglar a job

Security camera footage at a Diablo’s Southwest Grill in Georgia caught a man bursting into the restaurant and stealing what he could gather. But in a surprising twist, the owner wasn’t upset.

“Our burritos are such a smash hit we’ve got people breaking in at 4am for their fix,” wrote owner Carl Wallace in a Facebook post. “So if ya see our door looking hurricane fabulous at Wheeler Rd this is why.”

Wallace continued, offering compassion to the suspect. “To the would-be robber who is clearly struggling with life decisions or having money issues… please swing by for a job application. There are better opportunities out there than this path you’ve chosen.”

Wallace then offered his personal cell phone number and assured the burglar that police wouldn’t be called.

“Let’s sit down and talk about how we could help you and fix the road you’re on.”

The post has received more than 4,500 reactions and an outpouring support from the public as well as customers.

“I saw a Facebook page on Connect Augusta, and I thought it was probably one of the best things that I had ever read,” customer Cher Best told WRDW. “So as a result of what I read and the compassion, that was part of that Facebook post, I wanted to support the business.”

A Facebook comment from Liz Bellmer read: “I know what I’m having for lunch….as a small business owner who recently had to close my doors because of loss of revenue due to COVID, I appreciate your civility and your way of seeing this. We need more people like you who try to put a positive spin on crappy situations. Positivity should always win.”

Turning the other cheek

Wallace said the burglar didn’t steal much — just some cash from the register. But the risk he took was extremely high.

“They’re risking so much every time they do this: to the business owner, to themselves, or what could happen if the police show up during the process of the break-in,” he told WRDW.

The break-in was on Easter weekend, and Wallace added that was one of the reasons that he and his team decided to be compassionate.

“Instead of having the normal response of being angry, we decided to reach out, and say this is a bad career path that you’re on, and we’re willing to offer you a job if you’re willing to change what you’re doing in life.”

Is one man’s compassion going to fix the systemic problems that led this burglar to want to rob a burrito restaurant — no. But it does have the capability to change the trajectory of a life, and at the end of the day, that’s all anyone can really hope for.