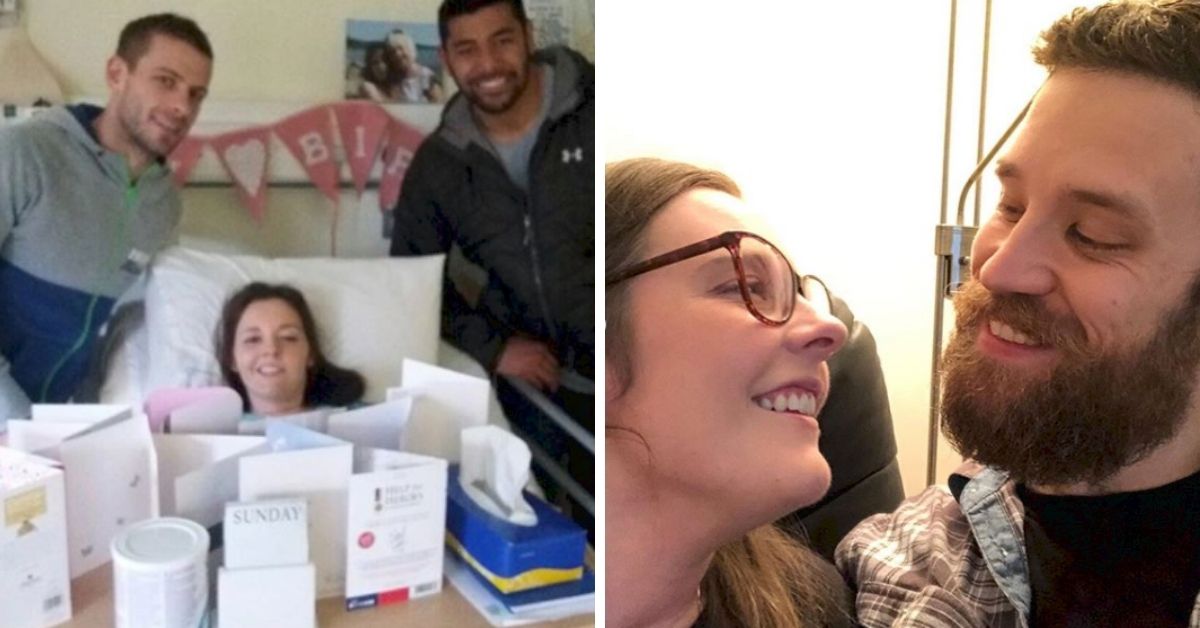 Rebekah Nesbitt’s story is like something out of a movie plot: woman excitedly plans her wedding when a disastrous car accident causes her to lose all memory of her engagement.

Rebekah got engaged after her partner, James Anderson, planned a romantic proposal during a trip to London. Less than a year later, she was in a terrible car crash and suffered a traumatic brain injury.

“It makes me so sad, but I don’t remember my engagement at all,” says Rebekah of partner James Anderson’s proposal .

This is the amazing story of how she recovered her memory and a newfound strength within herself.

Her life was almost perfect

“We had been together for four years by then, we’d bought our first home together and James, the thoughtful character that he is, whisked me away to London and proposed in Hyde Park,” Rebekah tells The Sun.

He tells me he was completely stressed out trying to find a quiet spot to ask me to marry him, and I’m so gutted I don’t remember it.

Rebekah Nesbitt to The Sun

“But hopefully there are many more years to make special memories.”

In September 2016, Rebekah’s was involved in a disastrous car accident on a Sunday morning.

They had planned fo their wedding to take place during a holiday weekend in August of the following year, but sadly, it never had a chance to happen.

Before the accident everything was great. I had finished university and was working full time in asset recovery.

“We had bought a house two years earlier and we were planning our wedding. I felt like a lucky girl,” she added.

“Then that morning I left James off at the gym and had a car crash on my way to a horse riding lesson,” Rebekah says. “I don’t know for a fact what happened, but I have always said I feel like I was avoiding a white and ginger cat.”

The truth is, she doesn’t really know for sure what caused the life-changing accident.

I can’t tell whether that’s the truth or something I have conjured up in my mind to make my actions make sense. I guess I’ll never know for sure.

“What happened is in the past. Now I have to focus on moving onwards and upwards, and enjoying everything my new life has to offer.”

Her fiancé never gave up on her

Rebekah, who was 24 at the time of the crash, was in a coma for three months, but er fiancé sitting at her bedside much of that time. She finally woke up on Christmas Eve.

“It was the best Christmas gift for my parents,” says Rebekah.

I must have been trying to talk previously, and mumbled the words, ‘I have no voice’ on Christmas Eve. But my mum was overjoyed and she said, ‘Oh Rebekah you do have a voice!’

When she woke up, she had no evident trace of the accident on her body. “Strangely there wasn’t a mark on my body,” she adds. “I suppose you could say it was ‘lucky for me’ that I wasn’t harmed in any other way.”

You would have thought I was sleeping peacefully if it wasn’t for the tubes.

But the reality of her suffering was invisible; she may have not had a scratch on her body, but her brain had suffered traumatic injuries, including significant memory loss.

Rebekah doesn’t even remember her time at the hospital

Rebekah spent four months in hospital, though it’s something she has “zero memory of”, and then was transferred to the regional brain injury unit in Belfast in January 2017 and spent nine months at a specialist rehabilitation hospital.

Rebekah now writes her own blog ‘Rebroken’ where she shares her experiences, and learning to live a new normal.

“I have lost a lot of my independence due to the left side of my body not doing what it’s told all the time,” says Rebekah, who moved back to her parents’ home when she was discharged from hospital. The effects of brain trauma meant that her “speech has changed, [her] memory can be unreliable and [she had] lost some of my mobility.”

Yet, Rebekah never lost her “sense of humour and love for life.” In fact, that’s what motivates her to keep pushing.

“But I’m working hard every day thanks to a brilliant physio and the support of James and my family,” she continues. “I’ve pushed further than was originally anticipated and I have no thoughts of slowing down any time soon.”

Throughout it all, her relationship anchored her

The couple may have encountered a lot more pre-wedding struggles than anticipated, but their feelings for each other are as fierce as ever.

My relationship with James hasn’t really changed in how much we love each other. I would say if anything, it’s stronger. I feel more sure than ever.

“One of the things that has always been so special about Rebekah is that everyone has always loved her,” James said.

“She’s just one of those people who could walk into a room and talk to anyone,” he gushes. “She’s inquisitive and fun-loving, and people have always loved her.”

James never left her side

“It still is tough in many ways,” James shares. “All those months in the hospital were grueling.

But he did not give up on her. Instead, he did everything in his power to help her return to consciousness.

I’d play her favorite music by Jack Johnson and these little Disney songs she loved singing. I don’t know if any of it helped, but it helped me feel like I was making a connection.

James Anderson to The Sun

“For a lot of the time, the silence was horrendous, and I didn’t even know then if she’d survive.”

Their future together is brighter than ever

For now, they are just focused on Rebekah reclaiming her life and staying healthy. In many ways, the two have had to accomodate to her new way of life and it doesn’t come without its difficulties.

I sometimes feel that I’m being selfish if I take myself off for a few days with the boys, but I think if I don’t look after myself then I’ll be no good to anyone.

However, James shares that “it does get easier in many ways.”

“We still have fun. Rebekah is still that same person, she’s just had something really difficult thrown at her.

Suffering is not always visible

As for Rebekah, the whole experience has given her one major insight: some people’s suffering is not always visible to the eyes. “Many traumatic brain injury survivors are invisible, too, but they face other challenges that could never be appreciated until it happens to you,” she says.

I have a new-found respect for anyone out there going through their own challenges, whether that’s through an injury or just what life has thrown at them.

Indeed, a lot of people go through incredible pain and suffering in silence. Whether it’s traumatic brain injuries as in Rebekah’s case, or the the effects of mental health conditions, many people around us are fighting silent battles.

That’s why it is important to remember to be compassionate and understanding, as we can never tell what someone else is going through.