Nurse Finds Firefighter Who Saved Her Life 37 Years ago 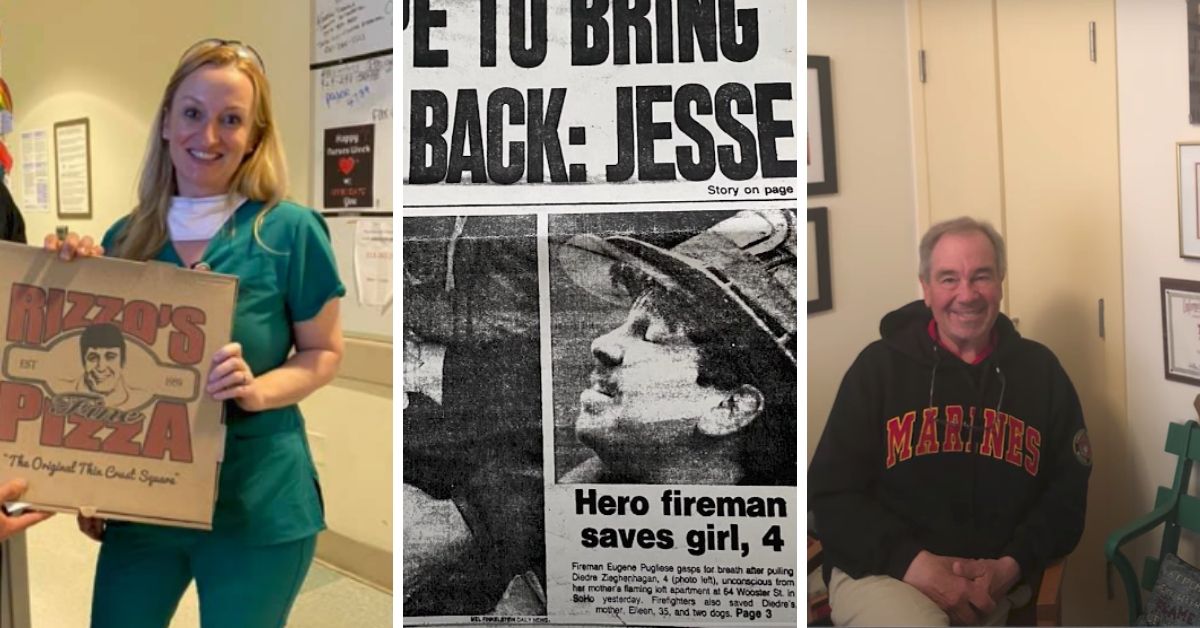 Firefighters are the most obvious, and perhaps overlooked every day heroes. From saving lives to rescuing cats stuck on trees, they put theirs lives at risk every day. Yes, it is their job but we tend to forget the dangers they face on a daily basis.

On the other hand, the current pandemic has revealed another set of heroes: our nurses who have been fight the coronavirus on the front lines, putting themselves at high risk of infection and in some cases, being unable to see their children or families for weeks on end.

And sometimes, heroes are rewarded with their own heroes. This is the story of a nurse who, due to the coronavirus, was reunited with the man who saved her life, 37 years ago.

She thought she would never find her savior

An out-of-town nurse, Deirdre Taylor, 40, had joined the front lines to lend her hand in the battle against the coronavirus in New York. Little did she know that her lifelong quest to thank the man who saved her would find its resolution in the city.

As a child, Deirdre was rescued from a deadly fire in a Manhattan building almost 40 years ago. At the time, she was only 4 years old. After the fire, her family left the city but Deirdre never forgot the brave firefighter who gave her the life she leads now.

I always knew I came close to losing my life that day. Without him, I wouldn’t be here. I had a second chance at life, thanks to him.

All that Deirdre had was an old newspaper clipping from the Daily News reporting the fire, and the name of her saviour: Eugene Pugliese. For years, she tried to locate the man and find him but to no avail.

Deirdre feared the worst had happened, thinking he might have been amongst the firefighters who lost their lives in 9/11. “I wondered about him on 9/11 and hoped I would get the chance to thank him, and I finally did,” said Deirdre.

“I didn’t know if he was still alive, particularly after Sept. 11,” said Taylor. All her Google searches had come up empty. “Part of me thought I waited too long to track him down.”

A twist of fate put the right people on her path

Deirdre, like many nurses all over the world, left her husband and children in Virginia to go to New York, returning to the city where the traumatic fire happened.

She was working a shift at NYU’s Langone Hospital, when a group of firefighters walked in. They had brought pizza to show their appreciation for all the health care workers who have been working tirelessly in the emergency room.

That’s when Deirdre seized her chance.

She followed them as they were leaving and told one of them her story. The firefighter then decided to call his captain at Manhattan’s Ladder 20, which is where Eugene Pugliese used to work.

Lo and behold, the captain had Eugene on his speed dial.

He said, ‘Oh, Gene. I know Gene. I’ve got his number in my phone.’ I didn’t think I was going to be able to track him down.

Her savior always wondered what became of her

Now 75, Eugene Pugliese, a Vietnam Marie Corps veteran and passionate Yankees fan has been retired for 24 years. To this day, he still has a copy of the front-page article covering his heroic act and the valor medal he received for rescuing Deirdre.

Eugene never forgot that fateful day, 37 years ago. It was December 1983, and he had been checking pipes in the SoHo neighborhood of Manhattan when a man alerted him of a fire down the block.

When he reached the building, he saw smoke coming out of the 6th floor. He didn’t think twice and went inside. “I didn’t even have gear on,” Eugene remembered. “I had a helmet and an ax. We took the elevator up and we went to the floor below. We went upstairs. The hallway was pretty well charged. There was a lot of smoke.”

He rescued her mother–but Deirdre was still inside.

“She kept screaming, ‘My baby!’ so I went back in and found a young girl who was unconscious,” Eugene said.

Eugene performed mouth-to-mouth resuscitation until Deirdre was back to consciousness.

I didn’t see her ever again after that, but I always wondered about her.

Hearing Eugene’s account of her rescue brought Deirdre to tears, who could not remember much of the event beyond what was reported on the newspaper article she had kept with her.

The fire obviously shaped the rest of my life. I always knew I was given a second chance at life. The copy of the Daily News was in my keepsake binder since I was a young child. I’ve always had a copy of the cover.

The two fighters hope to meet in person

Both Deirdre and Eugene are die-hard Yankees fans. They plan to meet in person, as soon as it is safe enough to do so.

“I hope to meet her soon, maybe later this summer. I’d love to meet her two children and go to a Yankees game together,” Eugene said.

Their story is an exceptional tale of fate but also of human will. Deirdre never gave up on her quest to find the man who saved her, even when things looked hopeless. This is what enabled the two of them to find each other after all these years.