Ariana Grande is Proof of the Power of Crying in Public 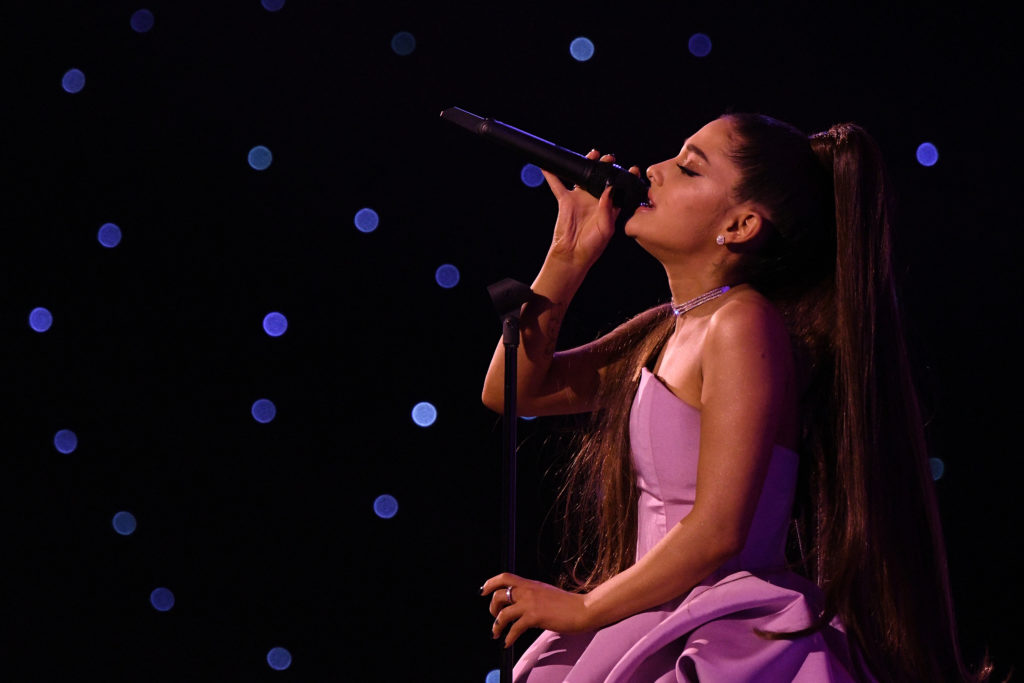 Ariana Grande has gone through a lot the last few years, and she’s done it all in the public eye.

First, her concert in Manchester, England was attacked by a suicide bomber who killed 23 fans and parents. Just two weeks later, Grande rallied with a charity concert to support the victims and survivors, One Love Manchester. At her side during the show was then-boyfriend Mac Miller, hugging her as she burst into tears.

Just over a year later, Miller lost his life to an overdose.

The public has been critical of Grande both before — with her “donut-licking” incident caught on camera — and after, as the tabloids followed every second of her doomed relationship with Saturday Night Live‘s Pete Davidson in 2018.

Through it all, Grande has been open about her struggles with PTSD after the tragedies she’s experienced. She drew fan concern and media frenzy recently when she was spotted crying on stage at concerts on her Sweetener world tour, but it’s less a cause for concern than a message for us to live by.

No Tears Left to Cry

The past two years have also been the most successful and productive period in Grande’s ife. With two hit albums, one of which earned Grande her first Grammy, and a world tour, she thrust herself into the public eye that has been so critical of her in the past.

Well, as she opened up in an interview with Vogue, her art, her music, and her supportive audience are how she’s making it through and fighting through her PTSD.

“I was researching healing and PTSD and talking to therapists, and everyone was like, ‘You need a routine, a schedule,’ ” Grande told Vogue. “Of course because I’m an extremist, I’m like, OK, I’ll go on tour! But it’s hard to sing songs that are about wounds that are so fresh.”

When trauma hits our lives, particularly in such significant and public ways as for Ariana Grande, we often lose our ability to openly communicate how we are feeling; the chaos swirling inside ourselves.

“Getting Ariana quickly back into the safe space of the recording studio appears to have allowed her the cocoon needed to express some of the emotions she may not have been able to share with those closest to her,” said Shannon Thomas, LCSW and international best-selling author of Healing from Hidden Abuse.

“There are thoughts and feelings about the losses she has suffered that may never easily be communicated through a conversation with a therapist or friends, but has come out in her recent music.”

Trauma affects so many of us in so many different ways

However, burying emotions is not good for mental or physical health.

“It’s like pressing on the gas and brakes of your car at the same time, creating an internal pressure cooker,” said Latasha Matthews, LPC, CPCS, CPLC, CAMS, an individual, couples, and family therapist.

Grande told Vogue that part of her recovery has been keeping an open dialogue with her fan:“I want to be there for them, so I share things that I think they’ll find comfort in knowing that I go through as well.” She explains: “But also there are a lot of things that I swallow on a daily basis that I don’t want to share with them, because they’re mine. But they know that. They can literally see it in my eyes. They know when I’m disconnected, when I’m happy, when I’m tired. It’s this weird thing we have.”

For those of us going through something similar, our friends and family can be a resource for support like Grande’s fans have been for her.

Part of the public fascination about Grande’s grief is that she mostly processes it privately — or releases a song about it. Her tearing up on stage despite being a consummate professional is unexpected and humanizing.

Grande admits: “I’m a person who’s been through a lot and doesn’t know what to say about any of it to myself, let alone the world. I see myself onstage as this perfectly polished, great-at-my-job entertainer, and then in situations like this I’m just this little basket-case puddle of figuring it out.”

Grande is aware that her fame and achievements put her in an unusual position when it comes to processing grief and trauma. But she doesn’t let that stop her.

It has only made Ariana stronger

She told Vogue: “I have to be the luckiest girl in the world, and the unluckiest, for sure. I’m walking this fine line between healing myself and not letting the things that I’ve gone through be picked at before I’m ready, and also celebrating the beautiful things that have happened in my life and not feeling scared that they’ll be taken away from me because trauma tells me that they will be, you know what I mean?”

Despite what we are taught in our family of origin or society, we can use our emotions to tell a powerful story if we learn to welcome and embrace them.

“Ariana Grande, who has reported that she has PTSD, can use her voice and her craft to release her feelings of pain and anxiety through her singing,” said Matthews.

“I use the analogy of a wound to explain trauma and it’s treatment. If you fell off your bike and gashed your knee you have two options, 1.) To clean it out, disinfect it and bandage it up. This would hurt initially but increases the odds that it would heal or 2.) Do nothing which could lead to the wound getting infected, festering and possibly becoming a much larger health problem,” said Bianca L. Rodriguez, LMFT, a licensed psychotherapist in private practice in Santa Monica, CA.

By talking about what happened and processing your feelings you’re more likely to heal from the incident, even though this will be uncomfortable initially.

“If you avoid processing the trauma this will likely impact your overall wellbeing and other symptoms will occur, such as nightmares, intrusive thoughts and physical pain may occur,” said Rodriguez.

“One of the hallmarks of PTSD is avoidance of stimuli associated with the trauma which is why most trauma treatments incorporate exposure after the client has mastered coping skills to ensure they can handle the emotions surrounding the traumatic event,” said Rodriguez.

It’s our emotions that make revisiting the trauma so difficult. As the traumatic event has happened in the past, there is usually no imminent threat to the survivor when talking about it. Finding a way to express and master emotions in a healthy way is an essential component to healing from trauma.

For centuries, art and music have been used to foster healing and bring people together.

Ariana Grande embodied this big time with her benefit concert for Manchester, and has continued to do so each time that she has shown her heart on stage.

“It was probably very scary to go back there but she did it anyway. And she allowed her fans to witness her pain as she sang Somewhere Over the Rainbow through sobs,” said Rodriguez.

“It says it’s okay to have and show your emotions and gives others permission to be vulnerable too,” said Rodriguez. This makes Grande very relatable because you can see she’s human and also suffers.

Many of Grande’s recent lyrics discuss her experiences with grief, heartache and disappointment which everyone experiences sometimes. These songs become coping tools for her fans when they’re going through hard times too.

“The rawness of trauma is extremely difficult to put into conversational words, but we see incredible bursts of creativity come from the pain that is bottled up inside,” said Thomas.

For those of us who don’t have a stage to sing on or lyrics to write, we can still use art to express ourselves, such as through journaling, mindfulness and traditional drawing.

Your pain is worth expressing — why not do something great with it?